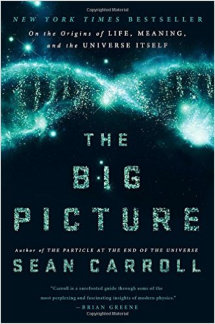 One of Carroll's goals in "The Big Picture" is to reconcile the laws of physics with the poetry in how we talk about ourselves in everyday life? How does he do that? He does it by drawing on the concept of emergence.

"We find it natural to use a vocabulary of 'causes' and 'reasons why' things happen, but those ideas aren’t part of how nature works at its deepest levels. They are emergent phenomena."

Here is an example of Carroll deliberately misleading us. To make naturalism more appealing he changes the meaning of words. It begins with his use of the word “emergent.” In his text Carroll defines emergence very gingerly and cautiously, and I wasn’t quite sure what he meant. I understood it better from the interview with him conducted by Robert Lawrence Kuhn and posted online at closertotruth.com. Kuhn pointed out two meanings of “emergent.” “There's a difference between something that's emergent that can be predicted from the laws at the fundamental level, and something that's emergent from the fundamental level that in principle that could not be predicted.”  Carroll replied: “I would call those the sensible and the silly notions of emergent. I'm using the sensible notion.” It’s this “sensible” meaning that Carroll gives the word “emergent” in his book.  Recall that for him the laws of physics are merely manifestations of solutions to Schrodinger’s equation at another scale. But because they appear at a different scale he says they’re “emergent” at that scale. He applies the same logic to our everyday way of talking. When he refers to that as “emergent,” he means it will be just as determined as the laws of physics are as a result of their concordance with the Core Theory.

Huh! Everyday talk is like the laws of nature! How can he justify that? More...

Various ideas people over two centuries have come up with for how we evolved.

A magical view of the world telling us we already are wonderful, and how to become even more so.