How can you judge the claim of young-Earth creationism, that the Earth and all life were created as little as 10,000 years ago? Plain common sense tells you it can’t be true. But how about what is claimed for the Modern Synthesis, that all life evolved over the past four billion years through the combination of genetic mutation and natural selection? How can you judge that?

Why not the same way, through common sense? When I do that, I get the same answer: it can’t be true.

Here’s how my reasoning goes: if you plot the actual capability of evolution as a graph over time, it’s the opposite of what you’d get if the claims made for the Modern Synthesis were true.

About two billion years ago life consisted of prokaryotes -- single-celled bacteria-like creatures. If genetic mutation and natural selection were the main drivers of evolution, how would you expect their capability to have changed since then? What’s happened since then that would make mutation and natural selection a more efficient mechanism of evolution? Nothing. Everything of significance that’s happened since then would make them less efficient and slow their action down. For example:

As generations come further apart, there are fewer opportunities for selection in unit time.

As creature-size increases, breeding populations get smaller, limiting how fast mutations can spread, and how easily they can be distinguished against noise.

As genomes get larger, individual mutations make a smaller contribution to the variation within individuals, making them harder to identify and evaluate.

As clutch size gets smaller, natural selection has fewer individuals in each generation to select among, limiting its ability to discriminate.

The effect of all these will be to progressively slow down the neo-Darwinian mechanism.

But what we observe is, over time evolution seems to speed up. The eukaryotes appear, then dozens of new kinds of animals, brains rapidly grow bigger, fish give rise to reptiles, mammals and birds in rapid succession, and humans simultaneously evolve upright posture, hand-eye coordination adequate for tool-making, capacity for speech, and much larger brains, in just five to ten million years.

Now I’ll make a claim: plot what's observed as a graph of capability against time and what you get is capability rising rapidly over time. Like this: 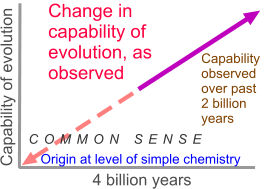 Extend that trend back to zero time and it would intersect the capability axis somewhere around the zero point. The common-sense inference is, evolution is driven by an agent with an initial capability of near zero (chemistry?) but able to grow in capability over time.

Now let's graph the capability of genetic mutation and natural selection. Over time, for reasons such as those listed above, that agent’s capability declines over time. Now extrapolate that trend back to zero time and it rises to a very elevated, God-like, value on the capability axis. Like this: 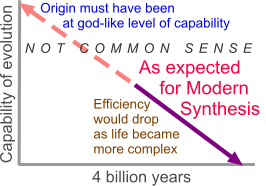 You may object that estimates of the capability of evolution over time do not exist. I’d respond, why not? I believe Gaylord Simpson did say he saw no sign of progress slowing down in the evolution of mammals. If I’m right about that, then presumably the progress of evolution overall could be estimated, and my application of common sense to the claims of neo-Darwinism could be checked. Appealing to such an estimate is not illegitimate.

A magical view of the world telling us we already are wonderful, and how to become even more so.